A Modern History of Cremation

Cremation is nothing new. Civilisations have been cremating their dead out in the open for centuries. The Romans would burn their bodies because it was cleaner and saved space. The Vikings – any excuse for a grandiose send-off will do. But what if we wanted to do it today?

A cremation is a form of body disposal, typically performed in place of a burial. The dead body is placed in a cremation chamber and subjected to extreme heat and direct flame so as to convert it into cremains.

The father of cremation

Way back in 1883, in the small town of Llantrisant, Dr.William Price fathered a child with his (60 years younger) housekeeper. By the time his son – named Iesu Grist (Jesus Christ) – was born, Price was 83. He also had taken to wearing a scarlet waistcoat and fox-skin headpiece. He often paraded through the town of Llantriant carrying a blazing torch and a druid’s crescent moon. 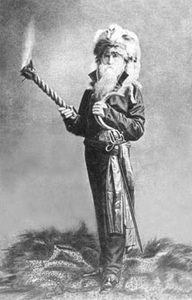 Unfortunately, Price’s son died – aged just five months. The heartbroken Dr Price took the boyʼs body to a hilltop above Llantrisant on a Sunday. Where (in full view of the nearby chapel) he attempted to cremate the body in paraffin. Thinking that Price has murdered his son and was trying to dispose of the body, a furious crowd of locals dragged the body from the flames and attempted to kill Price.

They proceeded to perform an autopsy and concluded that Price was not guilty of murdering his child. He had died of natural causes.

Price was not charged with infanticide but was instead tried in a Cardiff courtroom for performing cremation rather than a burial which the police believed to be illegal. Price was brought to court on a charge of cremating his son in public. The judge ruled that burning a dead body is “not a misdemeanour unless it constitutes a public nuisance.”

It was said that “The worthy, social elites who founded the Cremation Society played their part in the movement – but it took Price’s shamanic balls of steel to actually do the deed.” (see Williams v Williams 1882). Price argued that while the law did not state that cremation was legal. It also did not state that it was illegal. The judge, Mr Justice Stephen, agreed. Price was freed and returned to Llantrisant where a crowd of supporters cheering for his victory was waiting for him.

Price was finally able to give his son a cremation involving his own personal Druidic prayers.

In 2010 Davinder Gai of Newcastle won the right to be burned by fire on a pyre within a structure with sunlight shining directly on his body. As a result of the Gai case, the Ministry of Justice directed that “the way is not now open automatically for funeral pyres to be held. Burning bodies anywhere other than in a crematorium notified to the Secretary of State for Justice remains a criminal offence.”

The rules and regulations surrounding Funeral pyres are hazy at best. If you want to burn someone on an open-air pyre, be sure first to submit an application for cremation to a local crematorium. Buring bodies outdoors can look pretty suspicious. this should alleviate you from any unwanted suspicion.

What are the alternatives?

Alkaline hydrolysis – also known as, chemical cremation or biocremation is the same as a traditional cremation, but with no fire. The process produces far less carbon dioxide and pollutants.

The process takes inspiration from the same chemical reaction that is used to dissolve blockages in drains. The body is placed in a pressure vessel that is then filled with a mixture of water and lye and heated to a temperature around 160 °C but at an elevated pressure, which prevents boiling. Instead, the body is effectively broken down into its chemical components, leaving only clean white bones.

Currently, the process is only available in a few places in the UK but with the rise of the eco-funeral and a greener public, it’s slowly becoming the preferred method.

Cremations are generally a cheaper alternative to other methods as they are quicker and don’t require embalmment. However, the costs involved with the construction of a funeral pyre could prove costly. It is important to weigh up your options before you make any final decisions.

Should we re-use graves?

Does my pet need a funeral?