It isn’t just a stereotype that the Victorians (and a good deal of their predecessors) were obsessed with death. As well as ritualising it and dressing it up, past mourners were also great at reinventing it. We take a look at the inventions within the coffin and burial world that haven’t stuck around – mostly for good reason – and whether they’d do well today.

A particular worry for the Victorians on both sides of the Atlantic was the stubborn possibility that the dead were actually very much not dead. Trust the Victorians to combine over-protective safety measures with terrifying superstition.

The fear of being buried alive resulted in safety coffins. These were an elaborate affair with air tubes, strings tying a corpse’s hand and feet to a bell above-ground, complete with vigorous spring-loaded lids.

VERDICT Victorian safety coffins were a great feat of design, but we’re not keen on the sheer paranoia and exhausting fear that’s required to create them. It’s health and safety gone mad. 2/10.

We can’t really pin all the bad inventions on the sex and death-obsessed Victorians, even if they do have a lot to answer for. Just before that, in the 1700s, Austria’s Emperor Joseph II was so concerned with the utter extravagance of the country’s funerals that he decided to impose a law on lavish send-offs.

Joseph II decreed the use of wooden coffins that contained a trap door in the bottom, through which corpses would be dropped into graves. The coffin would then be reused for other funerals, saving wood and hastening the decomposition process.

Given the grandeur of 18th century Vienna, we can’t see how its middle class would have taken to reusing coffins, and there were more than a few reports where families were unaware of the practice.

VERDICT It’s a forward-thinking enterprise, and kudos is due to Emperor Joe on the sustainability front. On the other hand, we don’t know if lying to punters and state-sanctioned frugality is the way to approach modern funerals. 6/10.

Another Victorian invention, another spate of health and safety ingenuity – the escape coffin was even more sophisticated than the over-protective safety coffin. If you found yourself buried alive, so the thinking goes, you’d simply open the coffin of your own accord. Due to its top of the range spring-loaded lid, all the energy sapped out of you whilst temporarily dead wouldn’t hinder your ability to escape. Just a swift tap, then freedom.

So far, there’s been no reports that the escape coffin has been a particularly successful invention.

VERDICT  Sure, help yourself if you get the chance. But the logic seriously fails once you escape the coffin: under a load of soil, six feet under, you might prefer the warm and dry of the coffin to the worms and moisture of the dark outside. Counterintuitive. 3/10.

Body snatching was a huge phenomenon of the time, like hipster beards or sharing all your personal memories on Twitter now. It became an increasingly freelance job, as the growing medical profession in the 18th and 19th centuries meant dead bodies were in great demand. 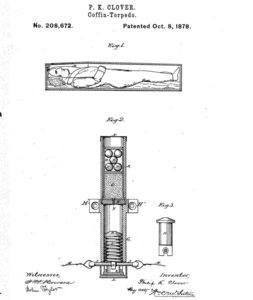 Coffin torpedos became the maverick way to keep the bodysnatchers at bay. Patented in the US, the “torpedo” functioned like a small shotgun secured inside the coffin lid. If someone tried to remove a buried body, the torpedo would fire out a lethal blast of lead balls when the lid was unceremoniously pried open.

VERDICT Pretty good. We don’t know if we’d like to be seen condoning maiming people, but what we do know is that this so-called torpedo has engineering panache. 8/10.

Glass coffins seem to be something out of Disney films, but in late 1800s Germany and middle of the century America, glass coffins were a way of keeping an eye on those pronounced dead. They soon became, however, the vessel of choice for the more saintly corpses out there – the usual beautiful women who had died young, rich landowners with a large sense of self-importance and a load of aristocrats. It was supposed that these dead people were too good to be covered over.

More recently, Vladimir Lenin is one of the most famous leaders who lies in state in a glass coffin. Others who rest eternally in a glass coffin include Hugo Chavez, Mao Zedong, Ho Chi Minh, and North Korea’s founding leader, Kim Il Sung.

VERDICT Given that glass coffins seem to be popular only among the vain and a solid set of authoritarian rulers, it seems this invention is only marketable to a niche market. 3/10.

Should we re-use grave space? Emperor Joseph II might have been an early adopter of green burial technology, and we’re looking for

Want to visit some graves? We’ve looked at the best cemeteries with events programmes to keep you going.

In any case, take a look at our funeral planning pages to see whether you’d like to go out in a more traditional coffin.