The social labyrinth of the Japanese Funeral

The Japanese funeral incorporates a subtle blend of religion, tradition, ritual and geography. To an outsider, the perplexing rituals may seem purposely filled with hurdles, trying to catch you out. But on closer inspection, it is a well thought out and refined practice.

Most funerals (Ososhiki) in Japan are performed in a Buddhist-style. Regardless of what religion the deceased or their family was. Almost all funerals in Japan involve cremation. With 99% of funerals resulting in cremation, the highest in the world. Some local governments have even banned traditional burials. Before World War 2 cremations were only reserved for the rich, but upon learning of its efficiency and cleanliness, cremation became the norm.

It may seem like the lack of choices for the deceased is limiting, but Japan has seen this as an opportunity to create impressive and memorable services.The result is that Japan has one of the highest average funeral costs in the world.

How does it work?

The traditional Japanese funeral consists of several components: a wake, a cremation, burial in the family grave and a memorial service. Each of these services can get very expensive but the main reason for the high costs simply comes down to space. This has lead to a rise in popularity of scattering ashes as opposed to burying them.

Japanese funerals take place over two days, families will hold a wake called “Otsuya” (meaning, to ‘pass the night’) before the actual funeral. Then, on the second day, they will have the actual ceremony known as “kokubetsushiki”. The Otsuya begins in the evening on the eve of the funeral. In the countryside friends, relatives and people from work gather at the deceased’s house, but in the cities families often rent funeral halls. To help cover the costs of the funeral, guests bring beautiful black and silver envelopes called busyugibukuro (literally meaning ‘non-celebratory bag’) – containing anywhere from ¥3,000 (£20) to ¥30,000 (£200). How much you give depends on the relationship with the deceased, generally speaking

The closer in blood, the more you’re expected to contribute.

This is where it begins to get complicated. There are two types of busyugibukuros. The first one is ‘goreizen’ and is presented before the body is cremated. the second one is ‘gobutsuzen’ and is only to be given after the cremation. To confuse the two to is a major faux-pas. When giving money it is important to never, ever use crisp new notes, this signifies that you expected the death and had time to get new ones.

To thank guests for attending the funeral, families will often send attendees with a gift. The cost of this gift is roughly half of the value of money they received. Specialised catalogues split into sections of varying price are sent to guests so they can choose a gift. This is why the busygibukuros will have names and the amount inside written on them – specifically, in grey ink.

At the Otsuya there is a meal (typically consisting of sushi and alcohol) in which bread is broken with the dead. This is known as Okiyome. Guests are expected to drink until inebriated enough to remember the good times with the passed. 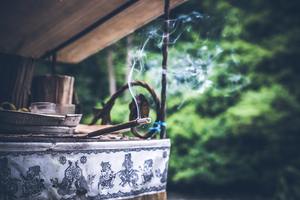 After the money is offered, guests are invited to burn incense to pray for the soul of the deceased. This normally takes place at a temple where a monk will chant sutras before an altar. After the ceremony, the deceased is carried in an ornate hearse to a crematorium.

At the crematorium, there is another round of drinks and food while the body is cremated. This takes around 70 minutes. Before the drinking begins, the head of the deceased’s household gives a toast, after which they shout “kenpai” Kenpai is the funeral version of “kanpai” which is a much more casual way of toasting – like you would at a pub. One letter stands between “cheers mate” and “I’m so sorry for your loss”

What happens to the remains?

After the body has been cremated and all that’s left is ash and bone, the family gather around and pick up the bones together using special long chopsticks or metal picks.

After all the ash and bones are collected into the urn, the family take the urn home where they keep it in the house for 49 days before it’s placed in the family grave (ohaka). An ohaka typically consists of a stone monument, two stone vases for flowers on either side and a small pocket for the incense. On the front of the stone monument, the name of the deceased is engraved.

Although the price may put some people off, it is defiantly worth thinking about a Japanese funeral. It’s unique blend of modernity, simplicity and spiritual ritual make it defiantly different. For more advice head over to our funeral planning page.