Rivalling the ancient Egyptians in their luxury. The Han Dynasty of China was equally extravagant in sending off their honoured ones. Encasing them in Jade Burial Suits, small tiles of hand carved jade, stitched together with expensive threads.

Perhaps the most opulent form of burial in history are the Jude Burial Suits of China. The Ceremonial suits made of jade and gold thread were the preferred method of afterlife immortality for the royal members in Han Dynasty China. 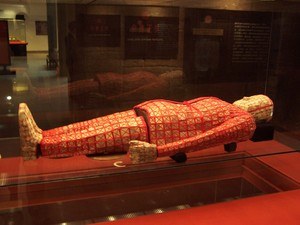 It was only until 1968 that these suits were considered a myth. Researchers finally proved their existence. Until then the idea that the Han Dynasty rulers would have such wealth was ludicrous. Currently, only 15 of the head-to-toe jade suits have been discovered.The Chinese believed that jade would protect the corpses from decay; it was a symbol of life and vitality. Much like the Ancient Egyptians, the ancient Chinese viewed death as a prolongation of life, and an emperor’s mausoleum was his after-life palace, mirroring his regal life on earth. All of the daily comforts of their past life had to be provided. This meant burying all their belongings with them. It wasn’t uncommon to kill faithful servants and trusted confidants so they could be buried with their masters.

=Jade has always been prominent in ancient Chinese culture. It is greatly prized as it stands for beauty, grace, and purity as well and its practicality when being sculpted into different objects. In regards to death, it is believed to possess magical properties that would protect the body from decay and ward off evil spirits.  As the Chinese saying goes: “gold has a value; jade is invaluable.” In the Han dynasty, all jade was the property of the emperor which meant anyone was caught owning or trying to sell it without permission would be killed. This warded off grave robbers and has kept the contents tombs in near pristine condition.

Two of the most spectacular suits ever discovered belonged to ruler Liu Sheng and his princess wife, Dou Wan. They were made of thousands of small plaques of jade that had been sewn together with gold thread. There were also additional pieces of jade shaped to cover eyes and plugs to fit into eyes, ears and other orifices. All to keep the evil out. Each suit consists of twelve sections: face, head, front and back parts, arms, gloves, leggings and feet. Particularly lavish was Liu Shengs suit. It was specifically made of2498 pieces of jade, sewn together with 1.1kg of gold thread and took an estimated 10 years to make.In some occasions the bodies were also places in intricate jade-covered coffins, which were equally magnificent, being built with hundreds of solid gold nails. 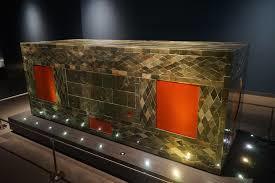 Out of all of the suits discovered. The ones belonging to Liu Sheng and Dou Wan were certainly the most extraordinary. It wasn’t only the guys at the top that got this treatment. Members of high society still had their bodies encased in precious stone and thread but in a way designed to fit are a more modest budget. It all depended on their ranking in society. Of course, the gold thread was reserved for emperors, silver was for close family members (sons and daughters) and copper or silk was for aristocrats of lesser rank.

Specific techniques were employed by the craftsmen. Attaching smaller stones together with the wire or thread meant that much larger shapes could be achieved than with singular pieces of jade. Sets of instructions and criteria of how the suits should be produced have also been found. “The Book of Later Han” details these regulations. But an examination of the suits shows that they haven’t always been made to fit said criteria. There is varying quality across the 15 suits discovered.

No matter how sophisticated the suit was, the intricate craftsmanship always showed. It was due to not only the way the gemstones were arranged together but also their shapes. Sometimes square, other times rectangular and on rare occasions trapezoid and rhomboids. In addition to the coffin and burial suit, many of the objects placed in the tombs were crafted from jade too. The tombs also contained bronze musical bells, incense burners, lamps, braziers and mirrors. Other finely crafted objects from the royal workshops were made of lacquer, gold and silver, as well as silk and other perishables.

Today, Jade Burial Suits occasionally pop up in an auction, normally with starting bids of £10,000 and unless you happen to be the same measurements as a 200bc Chinese Emperor then it probably wouldn’t fit. The closest equivalent burial would most likely be a modern mummification, in terms of grandeur. The added cost of a personal mausoleum is also not cheap at all, add to that all the amenities that a modern human may need in the afterlife and you are looking at a very pricey send-off, which is exactly what the emperors of the Han Dynasty wanted so it’s spot on really.