Dealing with death on social media

Dealing with death on social media

Social media has changed the way we grieve, as well as public opinion on discussing death openly. In the Middle Ages, those looking for any guidance on death, dying and grieving turned to what was known as the Ars Moriendi, or ‘The Art of Dying’. These were books that  offered practical guidance for the dying and those close to them. Now, our culture gets mosts of its guidance and comfort increasingly online.

Here we look at the ways social media, and the online world more generally, has affected the way we approach death. 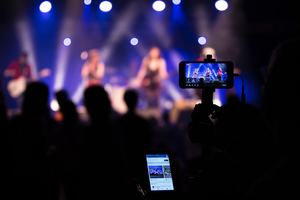 Over the years, there’s been a number of celebrities who have lived and died in full view of the public. When Motorhead’s Lemmy Kilmister had his funeral live streamed on Youtube in 2016, it was thought that fans of the metal band should be able to join in a private affair. Bandmates on social media called for fans “to gather globally and celebrate the life of our dear friend”.

For those in the public eye, with millions of lifelong fans over the world, it seems like a logical step to make death also a public event.

For most of us, the opportunity to log onto an account and vent, share or keep up to date is an essential mode of communication. It hasn’t just changed the way we interact but the way we grieve, too.

Getting online to grieve can be a way of accessing support from friends and family immediately, as well as people you’ve never met who can add a larger dimension to the experience. Online, you get the sense that we’re all in it together.

Online groups, support networks or even just a reply from a stranger on the internet can produce the same kind of response or take on a role similar to that of the group counselling currently prescribed by GPs.

In 2013 an American TV host made the news after he live-tweeted his mum’s final days after surgery complications. What at first was a way of passing the time in between appointments and visiting hours became a kind of live exploration into the sometimes mundane process of dying.

Twitter’s instant immediacy and potential for off the cuff thoughts means it’s a curious platform which really does evoke the reality of time. No other medium works better to suggest the limitations of time and its factuality. Twitter could become our own Ars Moriendi.

Death doesn’t always work well on social media — many readers will recognise the unsettling scenario where a dead friend or relative pops up on Facebook, perhaps in a prompt to recognise a birthday.

Facebook’s ‘On this Day’ and ‘Year in Review’ algorithms don’t always take into account that this was the year a close friend died, or that it can’t be mum’s birthday coming up due to her dying months ago.

Despite being something we can all relate to, such public grieving and shows of emotion can jar online. If your way of dealing with death isn’t always outwardly visible or given to cliched comments from strangers, mourning online can start to feel like a bizarre performance. Once something is shared, it’s very hard to contain.

Cultures change, and so does how we deal with death

Cultures aren’t static and the right way to grieve certainly isn’t. While going online to express your anger at yet another delayed train in the same breath as discussing your mum’s terminal illness might seem inappropriate, this isn’t too far away from how we communicate in real life. We don’t get the soapbox out to grieve; we do it whilst complaining about the washing up, or taking a walk.

Communicating on social media offers new ways of familiarising ourselves and others with death. Some of these are damaging, but others open up conversations.

In any case, as death academic Elaine Kasket has said: “With digital culture the dead are becoming more vocal and socially influential”. Even controversial monarch Richard III, dead for 500 years, live-tweeted his own belated funeral.

Read more about the way we talk about death, how to start that conversation and the future of our AI afterlives on DEATH.io

Take a look at how technology and new discoveries will impact how we approach our own death and those close to us.