A day out at the local cemetery isn’t everyone’s idea of a good time. You may find it hard to justify your decision to spend an afternoon among the long dead rather than any other ordinary activity. You’ll most likely be met with worrying looks, the same exasperated sigh or well-meaning questions at family gatherings. In any case, a jaunt to the nearest graveyard is considered an activity for the unnaturally morbid.

Yet, Bristol’s cemeteries aren’t just the eerie resting places we think they are. Instead, many are pleasant, almost lovely, and offer their own stillness and interest. Cemeteries are almost like libraries: both are quiet and a place where we can learn something from the dead. Whether it’s the quiet, the natural space or the affirming reminder of mortality that you’re after, here’s a guide to the best places reserved for the dead but open to all in Bristol.

Arnos Vale Cemetery is not only one of the largest cemetery’s in Bristol but one of the most elaborate. Its walkways are lined with neoclassical architecture and Gothic sculptures and, if you’re in the enviable position of not knowing anyone who’s died, these reasons alone are enough to pay a visit.

Almost left to the annals of Victorian history, Arnos Vale was saved by a grassroots movement and support from English Heritage. Now, it’s something of a community hub where, if you wished, you could get married, be buried and do a spot of pilates – all in one day. Its extensive woodland grounds are home to diverse wildlife, too. There’s no shortage of paths on which to not just contemplate life but that cake you’ll be needing after traipsing round the cemetery’s 45 acres.

The next time you visit Stapleton Road in Easton in order to stroll around Sweet Mart drinking copious amounts of mint tea and sampling one too many Indian desserts, why not extend your trip to include Greenbank Cemetery. With its large, rambling avenues and winding pathways it’s easy to amble round the cemetery for hours at a time. Greenbank cemetery has a long avenue of remarkably well-kept headstones, spanning centuries back to the middle of the 19th century, so you’ll have plenty of company once you get lost.

The best time to walk through this small graveyard near Clifton Village is at dusk, when any remaining sunlight is filtered through its overhanging arches. 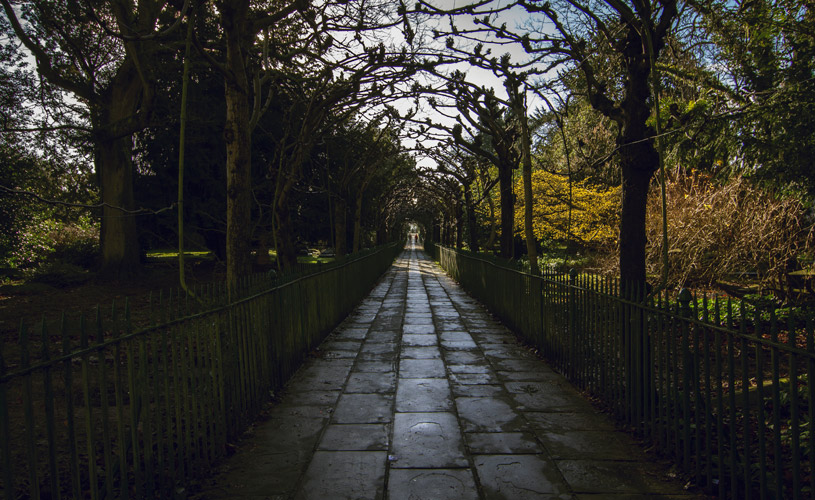 If you ever wanted to practice your inner poet and useless melancholic layabout routine, this is where to do it. The graves among Birdcage Walk are the remnants of a 12th century church ruined in the Blitz, and they’re joined by a huge yew tree perfect for sitting under to write your bestseller.

The cemetery at Bristol Cathedral is one of the smallest in Bristol but no less impressive. It has the largest number of Bishops buried per square mile than anywhere else in the city and the nearest boiling kettle is just a few steps away in the Cathedral’s tea room. Gothic ceilings, ornate tombs, a quiet garden and a cafe – Bristol Cathedral’s cemetery has got your day-out covered.

So, we all know that the Quaker’s in Bristol were quite radical. At the beginning of the 20th century the Quaker’s at St. Mary Redcliffe were also early adopters of cremation, if only to solve a modern issue. Faced with pressure from urban developers, the Quaker’s decided to give up their plot of land to urban renewal and take up cremation instead.

The Quaker burial ground at St. Mary Redcliffe, which vies for the tallest building in Bristol accolade, is home to hundreds of graves jostling for space and an interesting reminder of the ways in which cities accommodate their dead.

Cemeteries don’t have to be dreary. Often, they offer interesting insights into a place’s past and, for many cities, make up a large portion of the available open green spaces.

The top 5 morbid spots in Bristol